Indiana Association of Home Educators has seen tremendous growth in the number of inquiries about home education that we received from 2012-2016. We were very surprised when we read this piece from The Washington Post that claimed the numbers have decreased according to research by the National Center for Education Statistics (NCES).

Dr. Brian Ray of the National Home Education Research Institute (NHERI) was dubious of the research as well. Below are his thoughts on the research. ~ Debi Ketron, IAHE Director of Government Affairs 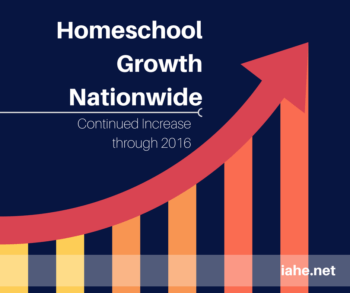 While the school-age population in the United States grew by about 2.0 percent from spring 2012 to spring 2016, data from 16 states from all four major regions of the nation showed that homeschooling grew by an average of about 25 percent in those states. If the data from these states are representative of what happened in the other states during those four years, then homeschooling is continuing to grow in both absolute numbers and as a portion of the overall school-age population.

If the state-specific statistics that are presented in this article are an accurate representation of reality, then what might one think of the recent U.S. Department of Education report? First, it must be kept in mind that it is just one study among many studies of the homeschool population and the findings of one study must be considered in the context of the entire research base and data from various sources. Second, it is possible that the methods of the researchers and the responses and non-responses of potential participants resulted in an inaccurate estimate in 2016, in 2012, or in both years. If the same survey is administered during the next five years or so, another data point will be available for analysis and triangulation. At this point, it appears that the estimate from the U.S. Department of Education is an outlier compared to the data from 16 individual states.

My synthesis of available research and empirical evidence is that the homeschool population continued to grow in absolute numbers and as a percentage of the school-age population from spring 2012 to spring 2016. In early 2016, I estimated that were about 2.3 million home-educated students in the United States at that time, and that the homeschool population had been continuing to grow at an estimated 2% to 8% per annum over the previous few years. [10] From all indications (e.g., the data in this report and other research), homeschooling numbers are continuing to grow, and future research will tell us more on this topic.