Why Should I Attend the IAHE Convention?

The annual IAHE Home Educators’ Convention is the main source of financial income for the IAHE.

The Convention Keeps the IAHE Afloat

By choosing to attend the IAHE convention instead of a for-profit convention, you are helping to support other Indiana homeschool families all year long.

“There is a danger in the homeschooling community when we withdraw support from our own state’s organization to support a mega-convention.”

I love and adore homeschool conventions! 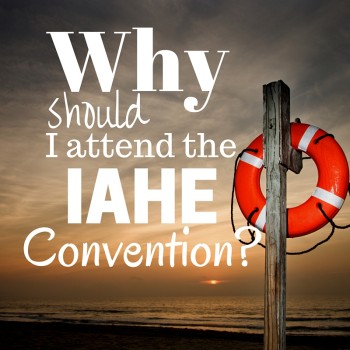 Books, books everywhere. Wave after wave of vendor booths full of educational materials in abundance. Being engulfed in a sea of like-minded people. Ahhhhh… it’s so refreshing and encouraging. But there is a growing undercurrent in our homeschool community and (in many others) that troubles me.

Once upon a time, in 2001 when we first thought about pulling our daughter from the public school system I began researching homeschooling on the internet. I stumble upon information regarding a convention in our state capitol… Indianapolis. So before we ever began a single day of homeschooling, I was blessed to attend a two day convention where I was encouraged and equipped! What a gift. In all the years since, the Indiana convention has proven to be a lifesaver, always offering the best in edifying speakers and workshop.

The Indiana convention is hosted by the non-profit ministry, the Indiana Association of Home Educators (IAHE). The annual convention provides the only source of revenue for this volunteer organization, and it is THIS organization that represents us as homeschoolers to our state legislators. The IAHE publishes a free educational magazine to homeschoolers throughout the year. They also have 16 regional representatives, homeschooling couples who are ready to help new homeschool families get connected to local support groups and answer questions as they begin their own homeschooling voyage. They also fight year round for our basic freedom as parents to homeschool our children.

Our neighboring states of Ohio and Kentucky also have similar organizations. Each organization offers a yearly homeschool convention which then provides the financial means to keep their ministries afloat throughout the year. Each of these three organizations and numerous others across our country are facing a challenge today.

(2016 update: Due to these challenges, Ohio and Kentucky can no longer afford to host their conventions.)

In recent years, for-profit mega-conventions are beginning to pop up and drain the resources out of the state conventions. They may appear the same on the outside, they may even showcase a lot

Chancellor of Patrick Henry College and Home School Legal Defense Association Chairman Michael Farris says, “They come into a state, run a big convention and they encourage homeschoolers, but they aren’t helping organize the homeschooling movement in a way that helps the states. We see some state organizations struggling as a result of these businesses.”
[http://www.bpnews.net/bpnews.asp?ID=34699]

I have been very blessed over the years to attend numerous conventions, both as a homeschool parent and as a vendor for some of our favorite homeschool curriculum. I’ve attended big and small conventions, in total I’ve been to 15 conventions in 10 years. I’ll attend 3 more this year as well. (Yes, you may call me a convention junkie if you would like.)

But there is a danger in the homeschooling community when we withdraw support from our own state’s organization to support a mega-convention. We are punching holes in the bottom of our own lifeboats to support businesses that don’t fight for our rights to homeschool.

I LOVE a great convention… and I’m grateful that I am surrounded by so many choices. But when given a choice, I will always to choose to support an organization that reciprocates and supports my family’s right to homeschool.

Yes, I’m attending 3 conventions… but I’ll be spending my money in Indianapolis.

This article was originally published on The Ramblings of the Blonde Mother Bear blog on February 23, 2011.