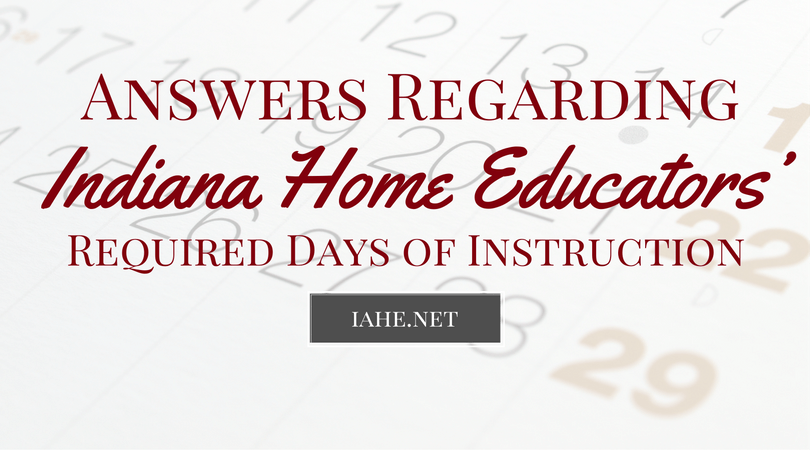 Many of the most frequently asked questions that the IAHE receives are about the requirement for home educators to track attendance for approximately 180 days.

In the face of the coronavirus, normal life and requirements have quickly changed. Indiana’s Governor, Eric Holcomb, announced on March 12th a 20-day waiver of the required 180 instructional days. Immediately, the IAHE began fielding multiple questions on whether or not this waiver would apply to home schools.
While the waiver was specifically presented as relief for public, brick and mortar schools, their annual attendance requirement is the standard to which our tracking is tied. We do not give legal advice, so when questions about the law arise, we defer to an attorney. IAHE asked Tj Schmidt of Home School Legal Defense Association for his opinion regarding this important topic.

Yes, this would apply to homeschool families as well. Under Indiana law homeschools are considered to be a private school. Under Indiana Code 20-33-2-4, a private school is required to “attend school each year for the number of days public schools are in session: (1) in the school corporation in which the student is enrolled in Indiana.” Therefore, if your local school corporation is granted a waiver by the Indiana DOE from the 180 day requirement, then all homeschools could also reduce their days by the same amount.
Of course, if a homeschool wanted, they could always hold themselves to a higher standard and complete the 180 days

Question: Do we in Indiana have to get our homeschool days in between July 1 and June 30?

Under Indiana law, the term “school year” does mean the period “beginning after June 30 of each year” and “ending before July 1 of the following year.” See Indiana code 20-18-2-17. Indiana Code 20-33-2-5 requires that every child who is compulsory attendance age “shall attend school each year for the number of days public schools are in session… in the school corporation in which the student is enrolled in Indiana.” Additionally, Indiana Code 20-30-2-3 states that “For each school year, a school corporation shall conduct at least one hundred eighty (180) student instructional days.”

However, if the question is whether a student has to finish all of the schoolwork planned by the parent for that year or complete an entire grade level between July 1 and June 30, the answer is no. State law doesn’t require that a parent has to start their home education program sometime after June 30 and end sometime before July 1. A homeschool parent could school year round if they wanted to. A parent is also not required to begin any given grade level after July 1 and finish before June 30. Instead, a parent could begin a new grade level at any time that was convenient for them and their child. So, it would be perfectly legal for a parent to wrap up the 3rd grade in February and start the 4th grade in March. It is also possible for a homeschool student to take more than one school year to complete the work the parent determined was necessary for the grade level they were in. Generally, this should roughly correspond with the amount of instruction found in a textbook for any given subject. However, for attendance record keeping purposes, the homeschool “school year” should follow the definition as that found in Indiana law- the period between July 1 and June 30.

Question: What would happen if a student was not able to finish the 180 days due to serious illness in the family, or for some other reason?

As stated, Indiana law requires 180 days between July 1 and June 30. Parents should count all days of instruction and learning that occur between those times. A parent should count not just the instruction for one particular grade level, but all instructional days between those dates. If a student still hasn’t received 180 days of instruction over a full 365 days then they are technically in violation of Indiana law. This situation could certainly be treated as any other failure to send a child to school and prosecution for truancy could occur.

Sometimes parents are confused with the fact that their child has not completed all of the material for a particular grade (i.e. 11th grade). Since they intend on finishing 11th grade in the next school year (beginning July 1, 2016) and then moving on to 12th grade they are worried that they will not be able to “catch up” and finish all of 12 grade before June 30, 2017. If they are not able to catch up then they would simply extend their child’s 12th grade year into the next school year (i.e. 2017-2018) and graduate their child sometime in that school year. This could be treated as a 5th year senior.