What is Our Freedom Worth?

This article previously appeared in the Spring 2015 Issue of The Informer Magazine.

With the large influx of new homeschoolers, it is a good time to review Indiana home education and funding. It would seem to make sense to some that since homeschoolers pay taxes, they should receive some tax dollars to operate their homeschools. In a perfect world, it may be a good idea. If one sits in a committee hearing at the Indiana Statehouse and listens to debate related to taxpayer dollars, one quickly comes to the realization that it is not a good idea. 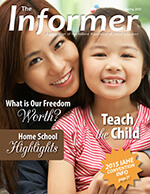 Once tax money is paid to the government, the state no longer views it as the individual’s money. We must remember that there are others who pay taxes that may not chose to use a service, such as those in a traditional private school, singles, or the elderly. When tax dollars are doled out, there is a need for “accountability” as to where and how that money is spent. The state would have the right and obligation to know how that money is spent. The state would determine the parameters regarding who receives it. It would reward those who homeschool in a way specified by the government thus dividing the homeschool community. Having the state define homeschooling makes it easier to regulate. The one who creates the definition has the power to control it.

IAHE has learned that leaders in homeschool organizations from other states have seen an attempt to increase regulations when tax credits have been debated. We must remember that the carrot of tax credits may be followed by a big stick of regulation.

In Indiana, we have already seen that government money comes with strings. We have one of the largest voucher programs in the nation, and a new report from the Center for Education Reform states, “The state is the second-worst in the country on infringing on private school autonomy, mandating such things as course content and insisting on allowing government observation of classes.” (School Choice Today, Voucher Laws Across the States, Ranking and Scorecard 2014, www.edreform.com/wp-content/uploads/2014/08/VoucherRankings-Report5.pdf). This is what is to be expected when accountability is required for the use of tax dollars.

Indiana has few homeschool regulations. IAHE reminds legislators when testifying in committee hearings that home educators do not take taxpayer dollars; therefore, we should not be regulated in the same way that those who take tax dollars are regulated. Indiana home educators would be wise to remember we are actually being protected by not taking taxpayer money.

State statute does not require homeschool registration with the state. Tax credits would voluntarily put families on the radar of those who may want to know how state money is being spent. Our precious freedom in Indiana is too valuable to be traded for government assistance.

Instead of giving homeschoolers vouchers or tax credits, a better option would be a child tax credit that is unrelated to education. It would allow all families to benefit instead of singling out a segment.

We must ask ourselves what is our freedom worth? Why are we homeschooling our children? Are we trusting in God or the government to provide for them? If we are trusting God, He will provide creative solutions to meet our homeschooling needs for curriculum, supplies, and resources.