In February, IAHE was made aware of a meeting of the Indiana Advisory Committee to the U.S. Civil Rights Commission. A friend of IAHE who advocates for the special needs community was present to testify. She notified the IAHE Government Affairs team regarding the tone of the meeting as it related to issues of school choice and specifically home education in Indiana. Concerns were expressed regarding the content of the report as a result of the February meeting.

Though IAHE was unaware of the meeting to discuss “School to Prison Pipeline”, we did not initially understand how it related to home education. The IAHE member families we interface with daily are highly involved parents. Homeschooling and prison cause a bit of cognitive dissonance. Seemingly, the two words do not relate to each other in the Indiana homeschool community we have been serving since 1983. 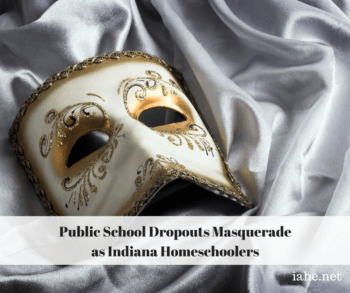 During our service to the homeschool community, we knew something odd was occurring with the public school system referring unsuitable candidates to our organization. However, we also knew there was and is confusion between homeschooling which is classified by the State of Indiana as non-accredited, nonpublic schools and public and accredited school at home programs run by the government. As we learned more, we realized this was a much deeper problem created by the public schools in order to protect their graduation rate. Many of the oddities we had noticed throughout the years were suddenly given credence and clarity. The testimony given during the hearing revealed some individuals behind the scenes who would like to use Indiana homeschooling as a “scapegoat” in order to increase Indiana homeschool regulations.

IAHE Action has been blogging about the situation and you may read more here. IAHE Action is a separate entity. To receive more specific updates on this issue you will need to join IAHE Action.