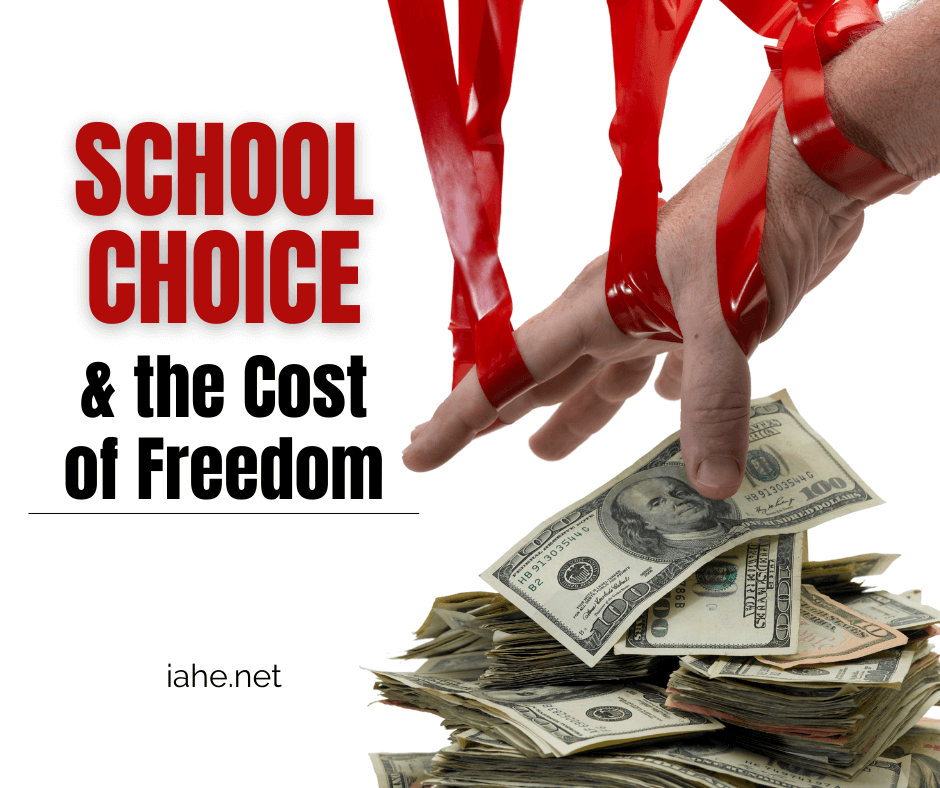 Nothing so poignantly describes the collective experience of 2020. Education has never been more scrutinized by our society than in the last year. And, homeschooling has never before been so prominently on display. It is no wonder that certain groups are taking advantage of these challenging times in order to expand government funding, and control, into the private school world.

Homeschool critics want the world to believe that parents are incapable of educating their children at home without government help.

As with Dickens’ literary masterpiece, this is a tale of two freedoms. One idea of freedom is packaged to the people in the form of “choice”. Choice means a parent can direct the government’s money to a specific pre-approved list of vendors in exchange for relinquishing their rights. Who will make this list of approved curricula? Neither the Indiana Department of Education, State Board of Education nor the Indiana Treasurer’s office have much knowledge of homeschooling. Consequently, this list may or may not include the curriculum homeschool families prefer. In addition to curricular control, other states require annual academic testing, vaccination schedules, registration, and more for homeschooled children. After all, this interpretation of freedom accepts the idea parents must still be supervised to make appropriate educational choices. This form of “freedom” is really just navigating another public school system.

On the other hand, there is the belief that parents have the ability to provide their children with what they need, when they need it, where they need it, and how they receive it. Adherents to this idea recognize the government cannot produce an effective learning environment for their children. Only a lack of cleverness, creativity, and resourcefulness can keep a parent from procuring needed resources. Anyone who has ever spent quality time with homeschool families or in a co-op has witnessed ample inventiveness, imagination, and ingenuity. These qualities are not in short supply!  Government has no influence, oversight, or control over a parent’s instruction of his/her child. Parents retain control and maintain privacy over student data, testing, assessments, vaccination schedules, and are recognized as primary authorities on what a child needs. This understanding of freedom means parents are the most agile, most capable providers for their children. Even the famous jurist William Blackstone normalized parental rights by placing the burden of a child’s protection, maintenance, and education upon mothers and fathers, not the State.

Home educators have long embraced school choice as a common noun. Meaning, we agree with the idea parents should be the final authority on guiding and directing their children’s education. We enjoy the benefits of this idea to its fullest extent. There may be subtle differences, but largely we want families to pursue educational environments best suited to their needs.

As highlighted annually during School Choice Week, “School Choice” is more than a benign option. School Choice is a well-funded network of large lobby groups united with a purpose. This School Choice is a proper noun because it is the title given to a group of think tanks, lobbying arms, and donors who have a large stake in seeing government money fund their programs such as charter schools, voucher accepting private schools, and other School Choice public/private programs. The more people they can claim buy into their policies means more opportunities for their business, and profits, to grow. The most visible embodiment of this network is National School Choice Week every January when people flood the State Capitol wearing bright yellow scarves. Scarves that have been sent for free to local homeschool organizations. Have you ever stopped to think why these scarves are free?

The Indiana Association of Home Educators (IAHE) has long warned of the dangers of mingling homeschooling with government money. Last year’s legislative session was spent strengthening public charter school oversight because of well-publicized fraud and declaring drop-out students as “leaving to homeschool” to pad graduation rates. The state already has a difficult time keeping charter schools accountable. How would homeschooled students entering the funding stream be any different? It is still a tax-payer funded avenue that can be used to manipulate recipients. As we saw with public online charter schools, the potential for fraud is enormous. Programs such as these begin with the best of intentions but wind up shackling honest, dedicated people.

Indiana homeschoolers are faced with a Tale of Two Freedoms: one free of systematic red tape, or one that invites a failed system into our homes.