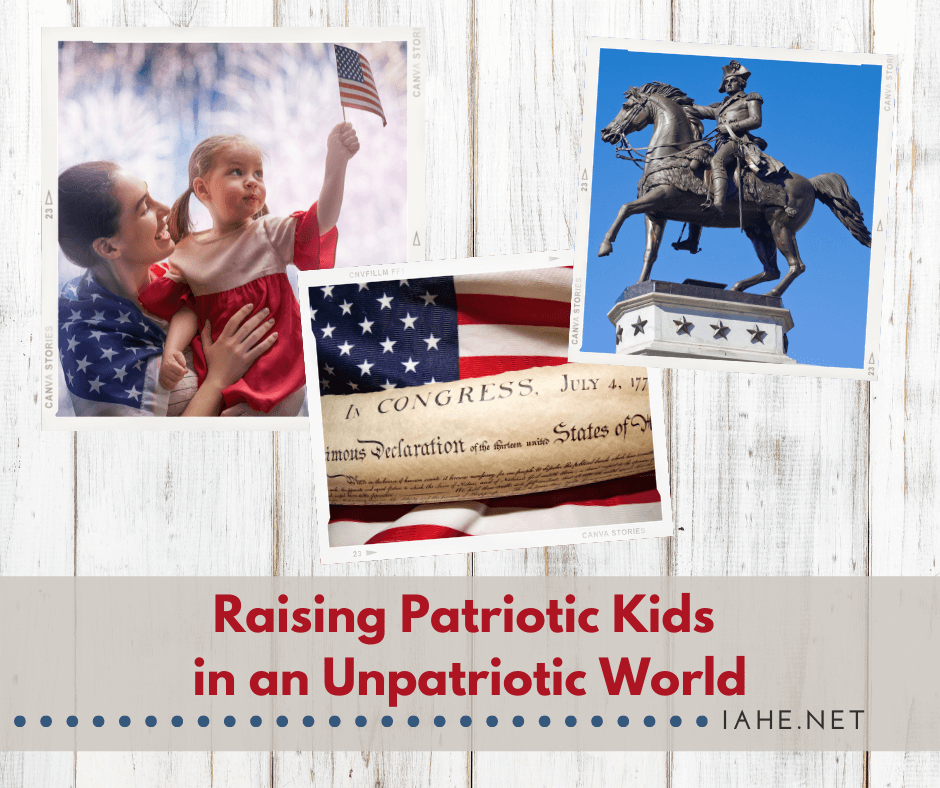 If there’s ever a time to instill patriotism in our kids, it is now! In a time where history is being re-written, American heroes are being vilified, family values are disappearing, and the Constitution is being trampled on, it is imperative that we parents raise up the next generation to speak out boldly to defend truth, to defend our Biblical values, and to defend our Constitutional Republic.

One question we get asked a lot is how do you raise patriotic kids?

What you focus on in your family, is what will become important to your kids. Early on in our homeschool journey when our kids were small, we made a decision that we would not just teach about patriotism and history, we would live it out as a family. We wanted our kids to experience American history, not just read about it.

We wanted them to be hands-on in honoring our veterans, participating in 4th of July parades, helping political candidates, and understanding the price that was paid for their freedom. The price of freedom is eternal vigilance and too often we view it as just a civics course in high school that we teach and then move on to another topic. Learning about freedom and how to keep it is a lifelong journey, and we wanted our kids to be able to defend their political beliefs which were rooted in their Biblical beliefs—so we made that one of our family’s top priorities.

Early on I recommend that you teach your little ones to shake every veteran or servicemember’s hand and thank them for their service. Our kids saw us do this so much that they started taking the initiative to do it on their own. We would be traveling and walking through an airport and all four of them would spot a servicemember and take off running in excitement to shake his or her hand and thank them. To this day, even as adults, they still take every opportunity they get to shake those hands.

I also highly recommend welcoming home veterans who are returning from an honor flight. It is one of the most rewarding things we have done as a family. Funny enough, we stumbled upon an honor flight after we landed in Orlando for a speaking engagement. We were walking to baggage claim and came upon a big crowd of people in the airport who were waving American flags and holding patriotic signs. We asked if we could join in, and a few minutes later the veterans started making their way through the crowd high fiving us as we cheered them on. I will never forget the smiles on their faces and tears running down their cheeks as we hugged them and proudly thanked them for their service. I will also never forget the impact it made on my kids.

The key to getting your kids hooked on history is to make it memorable. I never focused on memorizing dates and times with my kids, but rather telling the stories to them in a way that was intriguing and made them want to learn more. We also planned all of our travel around historical places, museums, presidential homes, and battlefields, and we made sure to make it fun along the way. You can see some of our favorite places on Chasing American Legends, our show that takes you with us to learn about some heroes from history.  (IAHE Premium and Supporting Members save $20 in the Patriot Academy Store!)

Our family has a passion for educating and equipping the next generation of young leaders to defend the principles that America was built on while teaching them the skills and strategies to lead their generation and our Nation with character and courage. You can visit www.PatriotAcademy.com to learn more.

Rick and Kara Green are from Texas and homeschooled their four kids who are now grown. They founded Patriot Academy and travel the country educating and inspiring citizens of all ages to do their part to preserve liberty and pass it on to the next generation.