The Alliance Calls For National Homeschool Day of Prayer

As we pray for New York, the most highly regulated state in the nation, regarding the details below, let us also pray for Indiana homeschoolers. IAHE and Indiana Association of Home Educators ACTION (IAHE Action) have been dealing with issues related to the School to Prison Pipeline since early 2016. Indiana has school discipline and truancy issues. “751,366 or 4.5 million. That is the number of instructional days and hours 102,030 students in Indiana lost during the 2012-2013 school year due to suspension and expulsion. Almost 1 in 10 students were suspended or expelled that year.”* Instead of expulsion or suspension that would harm a school’s A-F grade, some students were encouraged to “homeschool.” We are told a number of “homeschoolers” have ended up in correctional facilities.

IAHE has taken many phone calls from families who said the school reported their student’s enrollment as a homeschooler with the Indiana Department of Education. When IAHE provided the family with an explanation of what is legally required by law to homeschool, they decided that was not a suitable option for them. Where they ever removed from the roster of homeschoolers? We doubt it. Read more here.

Some would like to use this public school created issue as a springboard to increase homeschool regulations. Pray for the discernment of those in positions of authority to know the difference between a law-abiding homeschooler and others who are not homeschooling without adding undue regulations on law-abiding homeschoolers. Ask the Lord to provide wisdom to IAHE and IAHE Action as we deal with the State about this concern. Pray our financial needs will be met as we spend resources to defend home education in Indiana.

The Alliance (The National Alliance of Christian Homeschool Leadership) has declared November 3, 2017, to be National Homeschool Day of Prayer. Support us! We will be praying for the needs of New York homeschoolers, the most oppressed in the nation. New York Loving Education At Home (NYS LEAH) leadership has shared their prayer concerns with us at the Alliance. They are stated below.

New York is the most regulated state in America. Homeschool families must submit seven different documents to their school district annually, for each child. The regulations are overseen by the NY State Education Department (SED) and administered by the Superintendent of Education of each of the hundreds of school districts across New York. This causes great stress upon and even oppression of homeschool families as they work through the varying requirements. They need and deserve relief.

This day of prayer is being supported by:

The Alliance (The National Alliance of Christian Homeschool Leadership) 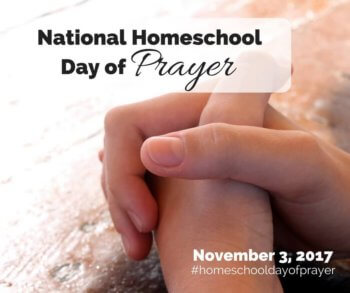 *Flier from the Children’s Policy and Law Initiative of Indiana.