Editor’s note: In celebration of the 30th anniversary of the IAHE, former board members were invited to attend the annual Home Educators’ Convention. The follow is an adaptation of the remarks delivered by one of the IAHE founders, Judge Kenneth Johnson.

It’s sometimes hard to imagine that it has been 30 years since the IAHE was born. As one of the founders of the IAHE, my only claim to fame is that we were privileged to be used by God to accomplish His purpose. The three original founding couples–Mark and Ellen Bell, 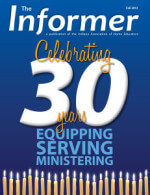 Doug and Nancy Jesch, and Joyce and I–each came to the decision to homeschool our children in quite unique and different ways. Joyce and I first heard about homeschooling while we were attending a legislative conference where the agenda was how to draft a Godly law and how to enforce it. It was there that we met several families that were home educating and we were impressed with their exuberance, their knowledge of their children, and their plans for raising them up, as scripture says, in the way in which they should go.

I don’t want it to seem that our decision to homeschool was like a burning bush experience where we clearly saw God’s plan for our family. I think you could call our first response, at best, hesitant. As a matter of fact, we even had a back-up plan to make sure that we wouldn’t be ruining our oldest child’s chances for a Harvard scholarship–even though he was only 5 years old at the time.

When I consider all the details that it took to begin the IAHE, I am overwhelmed at the power of God’s hand in it. By happenstance, our three families discovered each other’s decision to homeschool our children. We decided to start getting together monthly to share ideas and encouragement but other couples began joining us in the Bell’s basement when word got out about what we were doing. Around that time, Mark and I found ourselves alone together; two fairly new Rambo-like attorneys with a passion. We felt we ought to do something worthwhile with our time, and voila! The corporate charter and bylaws of the IAHE were born.

I can vividly remember those first monthly meetings. We had no money to send out notices nor buy needed supplies, so each meeting began by passing around a microwavable dish to collect donations. Being of a keen judicial mind, I started going to the restroom at the beginning of each meeting, having forgotten that the Jesches and Bells could count and notice my lack of participation.

We soon started getting phone calls from parents who had been visited by a social worker or truant officer, and had been threatened with legal proceedings that would include fines, possible jail time and the loss of custody of their children. We then got a call from Steve Goldsmith, who was the Marion county prosecutor and was pro-homeschooling. Together, we worked out a set of lenient prosecutorial guidelines. If someone were to visit a homeschooling family and they reported they were home educating their children, they were to be left alone. Mr. Goldsmith sensed that homeschooling families needed protection throughout the state and he sent these guidelines to all 92 county prosecutors with a strong suggestion that they be followed.

Some families were being contacted by the Indiana State Department of Education. It so happened that Sue Ellen Reed, a Hanover college graduate like Mr. Bell and myself, was the superintendent. She was not only convinced that home education was a good thing, she even assigned a person on her staff to assist and protect us. We enjoyed such a positive relationship with the Department of Education that if a parent would contact them about homeschooling, they referred them to us.

We were parents devoting our time, to teaching and training our children and as homeschooling in Indiana grew, we needed someone who could advocate for us in the legislature. Along came a man named Eric Miller. Due to his incredible energy and enthusiasm and his Advance American organization, he became our full-time eyes and ears in the state legislature. When any proposed bill would have an impact on our freedom to homeschool, he would advocate on our behalf and help us organize a response to our legislators.

Next we were introduced to a pastor, teacher and homeschooling father, Gregg Harris, who became a regular at our early conferences. Gregg also taught an all-day seminar that the IAHE co-sponsored which encouraged, exhorted and taught us how to live and how to train up our children in the way in which they should go.

We discovered that one piece of the puzzle was still missing, especially as we had families being legally challenged. We needed credibility in the academic and educational community. It seemed that the professional educators had ‘this’ study and ‘that’ study to prove their success, but we had no one on our side. Along came a statistician, an analyst, and a homeschooling father who filled that need. Brian Ray undertook numerous studies demonstrating the effectiveness of homeschooling, not only as an academic endeavor but as a life enriching experience. Brian continues to be our beacon for shedding light on the blessings and achievements of home educated children and continues to make himself available to testify in court in defense of home education.

If you have not heard a word I have shared thus far – hear this:

The cost of our freedom to choose to teach our children at home, and in our own way, is eternal vigilance. The early goal of the IAHE and HSLDA was to make homeschooling legal in Indiana and in every state. God has given us precious victories in achieving these goals and the worst thing we could do now is to think the fight is over. Please believe me when I tell you it is not. Our freedom to homeschool is always at risk – always!

The legal landscape can change in a heartbeat. It may be in a bill that directly outlaws homeschooling, or a single sentence hidden in a multi-paged bill that escapes notice, or it could be in some obscure administrative rule that denies or hinders your freedom to make the best choices for your family.

I hear people asking, if homeschooling is legal in Indiana and all 50 states, why do I need to support organizations like the IAHE or HSLDA? The answer is simple… because freedom isn’t free.

If you want to continue to enjoy the freedoms many others before you have worked and fought for, then be involved. If you want to be encouraged in your homeschool endeavors, to be supported and lifted up, then join with us. If you sense the need for us all to stand firm and united against the worldly forces that would seek to disarm and hinder us, then become an integral part of the solution. Stand with us.