100 + Whole-Hearted Books To Fight Back the Culture

This article first appeared in The Informer Magazine, Summer 2014. 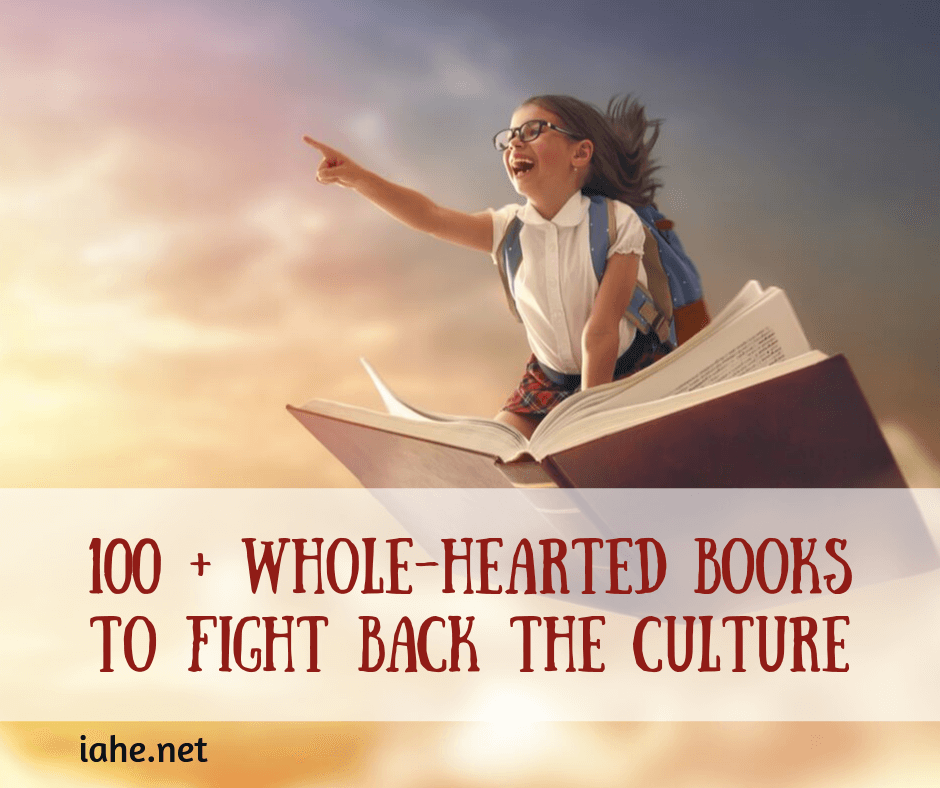 Have you been searching for a great reading list of books for children? The kind of books that contain wholesome stories full of adventure that inspire a young heart to courageous living? I had fun creating this list of over 100 wonderful books that have been favorites for our own family.

We are all aware that there is a battle raging in our culture for the minds and hearts of our children, but how do we as parents prepare them to live in the world? How do we teach values and build character at home on a day to day basis to equip them for a lifetime? One of the best ways is to choose and read books that will champion and uphold what is noble, good, right and true.

If you want even more book recommendations, be sure to check out Sarah Clarkson’s Read for the Heart: Whole Books for WholeHearted Families. From timeless classics to modern favorites, from picture books to adventure novels to read-aloud favorites, Sarah’s book contains more than 1,000 wonderful story recommendations for young people of all ages.

In her book Sarah Clarkson says, “The first thing a young heart needs is an education in all that is good. The classic children’s stories are a persuasive picture of beauty and goodness. They create an inner world that is a secret world for children’s souls, showing them through thrilling stories and stouthearted characters exactly what it means to be noble, good, and even holy.

”My parents… began with the great story of Scripture, filling my mind with the hero tales of the Bible. To this they added the innocent beauty of classic children’s books, never underestimating the power of a good story to affirm and further illuminate the truths they were teaching me from Scripture. I was formed in my earliest childhood by an imagination filled with stories, Biblical and classic, that set my appetite for all that was righteous, true, and lovely.

“Great literature also guides children through the second and harder wakening to an awareness of what is wrong. Insightful stories gradually confront children with the power of sin as it enters the tale of their lives and the stories they love. Characters like brave Lucy from The Chronicles of Narniaor David Balfour from Kidnapped who value what is beautiful and defend what is right will teach children that evil is something to resist and help them perceive the choice that must be made between right and wrong.”

“Books can become powerful companions – teachers that will fan the flames of your child’s heart and mind to life! Great stories, first in the Bible and then in classic literature can tune the inner workings of the heart from which, even in adulthood, one will make decisions and form values.”

~S.Clarkson from Read for the Heart: Whole Books for WholeHearted Families

The age designations for this list are only approximate. A child’s listening level will often be several grades higher than their personal reading level–it is OK to choose books from an older list if you’re planning on reading aloud to your children. I began reading aloud to our children from chapter books (such as Mr. Popper’s Penguins) before their third birthdays. Often I would take one at a time until they were hooked on wonderful stories and snuggling on the couch! Don’t underestimate your child’s ability to comprehend or listen to fairly advanced material.

What follows is a listing of just a few of the beloved books that we have read over the years. These are the books that our children will be reading to their own children some day.

The Hat, by Jan Brett (boardbook)

Storytime and the Millers, by Mildred A. Martin

The Complete Tales of Peter Rabbit, by Beatrix Potter

Bob Books, Set 1: Beginning Readers – Box set by Bobby Lynn Maslen (what we used in part to teach our children to read)

The Little Engine That Could, by Watty Piper

Wisdom and the Millers: Proverbs for Children, by Mildred A. Martin (all the Miller Family series are excellent for many ages!!)

Blaze and Thunderbolt, a series by C.W. Anderson

Mike Mulligan and His Steam Shovel, by Virginia Lee Burton

Caps for Sale, by Esphyr Slobodkina

Blueberries for Sal, by Robert McCloskey

Bread and Jam for Frances  (I Can Read Book 2), by Russell Hoban

Loving One Another, by Neta Jackson

Frog and Toad All Year, by Arnold Lobel

Story of Ferdinand, by Munro Leaf

Autumn with the Moodys (5 book series is wonderful), by Sarah Maxwell

Love You Forever, by Robert Munsch

The Courage of Sarah Noble, by Alice Dalgliesh

Missionary Stories and the Millers, by Mildred A. Martin

The Velveteen Rabbit, by Marjery Williams

Winnie the Pooh, by A. A. Milne

The Bears on Hemlock Mountain, by Alice Dalgliesh

Paul Bunyan and His Great Blue Ox, by Wallace Wadsworth

Dangerous Journey: The Story of Pilgrim’s Progress, by Oliver Hunkin

Twig the Collie, by Craig Massey

The Borrowers, by Mary Norton

Treasures of the Snow, by Patricia St. John

Scout: The Secret of the Swamp, by Piet Prins

Mary Jones and Her Bible (true story), by Mary Ropes

Shepherd of the Highlands, by Lily A. Bear

The Wind in the Willows, by Kenneth Grahame

Tell Me About Heaven, by Randy Alcorn

The Yearling, by Marjorie Kinnan Rawlings

Run For Your Life, by Betty Swinford

King Of the Wind, Marguerite Henry

Cheaper by the Dozen, by Frank B. Gilbreth, Jr.

Where the Red Fern Grows, by Wilson Rawls

The Door in the Wall, by Marguerite De Angeli

Around the World in Eighty Days, by Jules Verne

Paul Bunyan and His Great Blue Ox, by Wallace Wadsworth

A Christmas Carol, by Charles Dickens

The Chronicles of Narnia (all 7 books in one), by C.S. Lewis

The Sign of the Beaver, by Elizabeth George Speare

Encyclopedia Brown (older books of the series only), by Donald J. Sobol

Mr. Pipes and the British Hymn Makers, (series of 4) by Douglas Bond

Little Women, by Louisa May Alcott

The Yearling, by Marjorie Kinnan Rawlings

In His Steps, by Charles M. Sheldon

The Hawk That Dare Not Hunt by Day, by Scott O’Dell

The Pilgrim’s Progress, by John Bunyan

The Prince and the Pauper, by Mark Twain

I Dared to Call Him Father, (true story) by Bilquis Sheikh

The Ocean of Truth  (The Story of Sir Isaac Newton), by Joyce McPherson

Whatever Happened To Penny Candy, (An Uncle Eric Book- indispensible to give understanding of how to think about money from an early age), by Richard J. Maybury

Anne Frank: The Diary of a Young Girl, by Anne Frank

The King’s Shadow, by Elizabeth Alder

A Piece of the Mountain (The Story of Blaise Pascal), by Joyce McPherson

Peace Child (Sharing the Gospel with Cannibals), by Don Richardson

The Chosen, by Chaim Potok

To Kill a Mockingbird, by Harper Lee

The Eagle of the Ninth, by Rosemary Sutcliff

The Three Musketeers, by Alexandre Dumas

Through Gates of Splendor, by Elisabeth Elliot

Evidence Not Seen -the Jungles of World War II, by Darlene Deibler Rose

Pride and Prejudice, by Jane Austen

A Tale of Two Cities, by Charles Dickens

The Count of Monte Cristo, by Alexandre Dumas

Les Miserables, (Focus On the Family Radio Theatre Audio)by Victor Hugo (*the book is extremely difficult, however, worth it! Possibly the best redemption story after the Bible.)

The Robe, by Lloyd C. Douglas

The Lords of the Earth: An Incredible but True Story from Papua’s Jungle, by Don Richardson

The Screwtape Letters, by C.S. Lewis (almost better in audio)

Jackie Franks has been a wife to her husband and a teacher of her children in the home for 40 years. Now a new season has come, and with the blessing of her husband, she writes her blog as an encouragement to herself and others. (Titus 2:3-5) The habits of the home in one generation become the morals of society in the next. As William Ross Wallace said: “The hand that rocks the cradle, rules the world.”

Reprinted with permission. This post originally appeared on Jackie’s blog at: http://www.deeprootsathome.com.